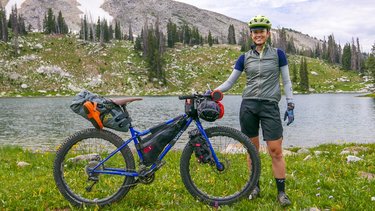 Katherine rode her bicycle 3,300 miles across the country in 2008, after which she took up both criterium and cyclocross racing in her native Texas. Since moving to Colorado in 2010, her palmarès have been on a steady decline. Her inability to take herself too seriously failed to line up with the overwhelming proliferation of actual, real-life Olympians and pro cyclists in and around her new home. She has since given up caring and decided to return to back-of-the-back racing in 2017. To that end, you can find her mountain biking, road riding, gravel grinding, bikepacking, fat biking or commuting via Surly Troll, and never able to to wholly give herself to one discipline over the other. She loves all rides and all bicycles and intends to enter a handful of cross-country MTB races, organized road events, disorganized gravel races and whatever else offers a one-day license or, better yet, doesn't require one.

When the chamois comes off, Katherine is the communications manager for Bicycle Colorado, one of the largest statewide nonprofits devoted to bicycle advocacy. She has also worked for the International Mountain Bicycling Association, Dirt Rag magazine and Bicycle Times magazine. For absolutely no discernible reason, she's known to friends and colleagues as "Boom Boom" and Katherine "effing" Fuller (KFF).

Her love of photography, the beautiful outdoors, bicycle geekery and long commuter train rides has led to her current bad habit: Instagram.
AMR Member since 2017.